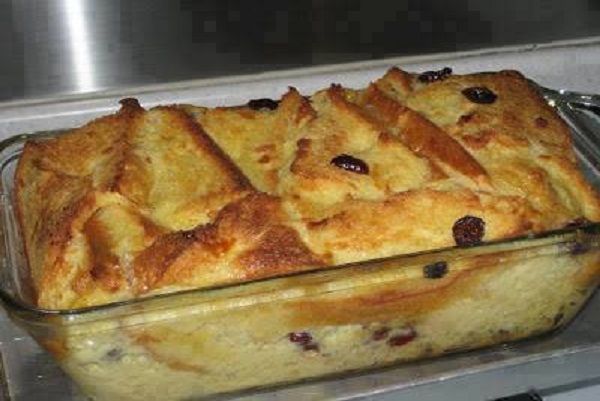 Bread and Butter Pudding is surely the ultimate transformation of leftover bread!! A classic comfort dessert, it’s custardy on the inside, golden and buttery on top. The only question is this: what will you serve it with? Ice cream, cream, custard – or something else?
I remember the first time I had Bread and Butter Pudding. I was really cynical. Stale bread for a dessert?? It sounded ridiculous.
How wrong I was. And how happy I was. Like a pig in mud, shovelling that moist, custardy pudding smothered in……..hmmm. I can’t remember. Probably ice cream. That’s my favourite. No wait, custard is my favourite. Homemade Custard. Can’t beat that.
No wait. Homemade Ice Cream and Homemade Custard. Ahhh. That is the ultimate combination, surely!!!
As I was doing my usual background research before sharing my Bread and Butter Pudding recipe, I was interested to learn that it’s called Bread Pudding in the States and there’s a quite well known New Orleans / Southern(?) version that is served with a sweet Bourbon Sauce.
This is Bread and Butter Pudding as we know it here in Australia, a classic English dessert. One key difference between this Australian/English version and the American version is that this – well, at least mine – uses far less sugar. I only use 1/2 cup of sugar compared to around 1 1/2 – 2 cups for the same quantity of bread in American versions.
I really think 1/2 cup of sugar is sweet enough, especially because this is the sort of dessert that really does need to be served with some kind of sauce or ice cream. So that provides extra sweetness.
Speaking of toppings!!! So I’ve already rattled on about ice cream and custard, but let’s not stop there! Cream is another obvious option, but the way I look at it, basically any sweet sauce goes great with Bread and Butter Pudding. Maple syrup, golden syrup, even honey, chocolate sauce, strawberry or other sweet sauces. You could even thin out a jam with hot water to turn that into a syrup!

*Preheat oven to 350 degrees F / 180 C
*Add cinnamon to sugar in cup and mix well.
*Set aside.
*Generously spread one side of each piece of bread with butter or margarine.
*Cutting diagonally, slice each in half.
*Arrange triangle slices in pan, slightly overlapping, with butter-side
up and cut edges facing the same direction, making a spiral.
*As you add the bread, sprinkle with sugar, cinnamon, and raisins.
*Put milk in small bowl, add eggs, and using whisk or fork, mix to blend well.
*Pour milk mixture over bread and raisins in baking pan
*Set aside for about 15 minutes for bread to absorb liquid.
*Bake in oven for about 30 minutes, or until top is golden brown.
*Serve the pudding while still warm in individual dessert bowls.
*It is eaten plain or with cream poured over it.