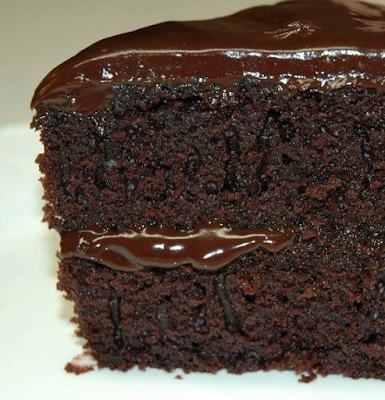 Excellent chocolate cake, I’ve been looking for a good recipe like this for a LOOOONG time. I didn’t change anything about it. I made it the first time with the icing as suggested, it was great, but I found the icing a bit too heavy and the cake on its own without the icing speaks for itself. I’ve made it about 5 times, and have taken it to parties, and everyone gets at least 3rds!
– WOW!!! This turned out GREAT! I live at 5K feet, so usually cakes flop and turn out so gross, but I made this just the way the recipe says. I omitted the cinnamon, used whole milk instead of buttermilk, and substituted a “yogurt spread” for the butter. And baked in two 9″ rounds for 28 minutes. Turned out GREAT! I added a bit more cocoa powder and it tastes great! I didn’t use the frosting, sicne this is for the child I babysit, and his mom is going to decorate the cake for his birthday. Thank you! It’s yummy!
– This is the best MEDIUM CHOCOLATE cake. Second best is Chocolate Sheet Cake. They are almost the same recipe except for all butter vs half butter, half shortening. Use the easier directions. It tastes the same. They both are thin batter so don’t roundup very much – like you’d want for cupcakes. E’s FAVORITE!
– Absolutely delicious cake and very easy to prepare! My family love it and just can’t get enough! The only difficulty I’ve had is getting it out of the pan in one piece as it is so moist that it tends to stick in a couple of places even when the pan is liberally greased and floured. I’m thinking I’ll try lining the pan with greaseproof paper next time and see if that works better. I’ve baked this a few times but most recently for my son’s birthday party last weekend where it was a big hit. I omitted the cocoa and pecans from the icing for a slight variation in colour and flavours and it worked equally well. One of my son’s friends enjoyed the cake so much he has requested the recipe so his own mum can make it for him!

Preheat oven to 350 degrees. Grease and flour 2 9-inch cake pans. Line bottom of pan with parchment paper.
In large bowl or standing mixer, cream butter until light and fluffy. Add sugar and beat until creamy. Add eggs, one at a time, beating well after each addition. Stir in melted chocolate.
In separate bowl, combine four and salt. Add buttermilk and chocolate mixture, alternating. Stir in vanilla.
In small bowl, dissolve baking soda in vinegar. Slowly add this to the chocolate mixture. Mix just until blended. Do not over-mix.
Pour batter into prepared pans and bake for 30-35 minutes or until toothpick inserted in center comes out clean. Cool in pans 10 minutes then remove from pans. Transfer to wire racks and cool completely before frosting.
Chocolate Frosting
In large mixing bowl, cream butter until light and fluffy. Slowly add sugar, 1/2 cup at a time, beating well between additions. Stir in chocolate and vanilla. If necessary, thin frosting with 1-2 tsps. half-and-half