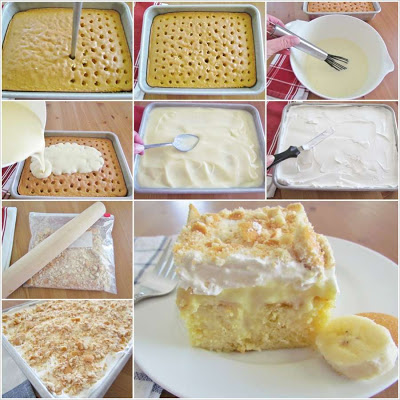 I felt that the banana pudding fake banana taste overwhelmed the cake. Next time I’ll use one vanilla and one banana pudding. I sliced one banana over the pudding, under the cool whip, and next time I’ll add more. It was good the day we made it but soooooo much better the next day so I really would suggest making this in advance
I used banana nut bread, added 2 extra packages of pudding and made it kind of soupy, poured it over cake mix so it would get the bread really moist inside, put it in the refrigerator for about 30 minutes, then proceeded with the remaining prep, adding bananas on top of the pudding, then the whipped topping and vanilla wafer crumbs. It turned out absolutely delicious. It actually happened by mistake the first time, as the pudding would not set up, so I put it in the fridge to get it to set up. That didn’t work, so I added two more packages of pudding that did thicken up. The rest, as they say, is history.
To Make this Recipe You’Il Need the following ingredients:….

How to Make It

Prepare cake mix according to package directions for a 9×13 cake.
Once cake comes out of the oven, allow it to cool for just a couple of minutes.
Then, with a wooden spoon handle or some other similarly-sized object, begin poking
holes in the cake.
You want the holes to be fairly big so that the pudding has plenty of room to get down in there. Be sure to poke right down to the bottom of the cake.
In a bowl, whisk together instant pudding with 4 cups milk. Stir until all the lumps are gone. Let pudding sit for just about 2 minutes so it has just slightly begun to thicken but not fully set, it should still be easily pourable.
Pour pudding over cake. Taking care to get it into the holes as much as possible.
Spread it all out and using the back of the spoon gently push pudding down into the holes.
Put the pudding in the fridge to set and cool.
Once your cake has completely cooled, spread on whipped topping.
If you haven’t done so already, crush your vanilla wafers.
I just place mine in a Ziploc bag and crush them with a rolling pin.
Leave some of the pieces big. It’s nice to have a bit of a crunch when you eat the cake.
Spread crushed wafers onto the top of the cake.
You can do this part immediately before serving the cake if you like.
This will ensure the wafers are crunchy when you serve it.
I think this cake gets more delicious over time.
To me, it’s even better the next day so it’s a great dessert to make ahead of time.
Serve with freshly sliced bananas. Keep refrigerated.