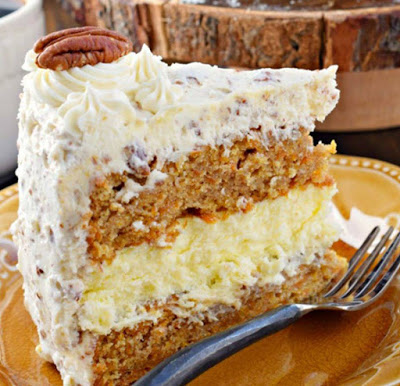 Instructions
Preheat oven to 350 degrees. Butter a 9-inch springform pan and set aside.
For the cheesecake mixture:
In a mixing bowl, whisk together sugar and 1 1/2 tsp flour until well combined. Add cream cheese and using an electric hand mixer set on low speed, blend together cream cheese and granulated sugar mixture until smooth. Mix in eggs one at a time, mixing just until combined after each addition and adding in vanilla with second egg. Blend in sour cream. Forcefully tap bowl against countertop about 30 times to release air bubbles. Set mixture aside.
Rinse beaters clean. In a separate mixing bowl, whisk together flour, baking soda, baking powder, salt, cinnamon and nutmeg for 30 seconds. To a separate large mixing bowl, add canola oil, applesauce, granulated sugar, brown sugar, eggs and vanilla extract and blend mixture using electric hand mixer set on low speed for 1 minute. With mixer running on low speed, slowly add in dry ingredients and mix until well blended. Add carrots and mix until evenly distributed. Tap bowl forcefully against counter, about 3 times, just to release large air pockets.
To assemble cheesecake:
Pour 1 1/2 cups carrot cake mixture into buttered springform pan and spread into an even layer. Dollop about 1/3 of the cream cheese mixture by the spoonfuls over carrot cake layer (don’t spread or swirl). Spoon remaining carrot cake mixture over cream cheese layer, then finish by drizzling by the remaining cheesecake mixture over carrot cake layer, working to cover all of the carrot cake mixture (I found this easiest to do this was by slowly drizzling over with the spoon). Bake in preheated oven 60 – 65 minutes, until center portion only jiggles slightly and tenting with aluminum foil at 40 minutes to prevent excessive browning (tent in a way that the foil doesn’t touch cheesecake or it will stick). Remove from oven and allow to cool on a wire rack 1 hour, then cover with foil and chill in refrigerator 6 hours or overnight.
For the topping:
In a mixing bowl, using an electric hand mixer, whip together cream cheese and butter until smooth. Add remaining topping ingredients and mix until pale and fluffy, about 4 – 5 minutes. Spread evenly over cheesecake then chill cheesecake in freezer for 20 – 30 minutes. Sprinkle edges with chopped pecans. Cut into slices. Store in refrigerator in an airtight container.
Source : allrecipes.com