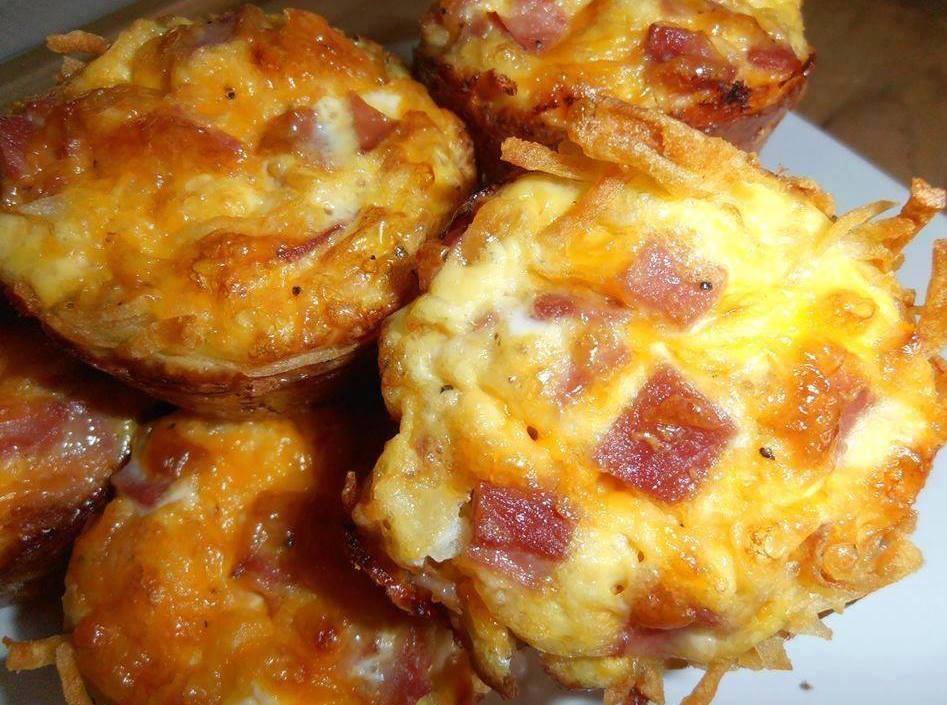 I really like one dish meals. It makes things so much easier. This Hash Brown Breakfast Cup is one such recipe. In a single muffin cup you have a brown and crispy hash brown crust, that is filled with ham, sauteed vegetables, melted cheese, and a perfectly cooked sunny side up egg. While I often serve them for breakfast or as a brunch dish, we also enjoy them for lunch or dinner served with a tossed green salad and fresh bread or toast.
The first time I saw this breakfast dish was on Everyday Food. I liked it so much I just had to make it. These breakfast cups start with a hash brown crust that kinda looks like a bird’s nest (this recipe is often called Bird’s Nest Breakfast Cup). I have used frozen shredded hash brown potatoes so all you need to do is defrost them. They are then mixed with egg whites (to bind everything together) and a little butter (for flavor) and this mixture is pressed into well buttered jumbo sized muffin cups and baked until wonderfully brown and crispy. Then the filling is added.
Now, for the filling I have used red onion, red bell pepper, ham, and spinach (use fresh or frozen), but you can use other things. Instead of red onion, you could use yellow onions, chives, green onions, or even a shallot. Instead of red bell pepper and spinach, you could use diced tomatoes, mushrooms, zucchini, parsley, or even some diced avocado. Now, if you’re vegetarian you can omit the ham. Or, other options for the ham are bacon (including Canadian back bacon or turkey bacon), crumbled sausage, or proscuitto. For the grated cheese, good choices are Cheddar, Colby, Monterey Jack, Swiss Cheese, Mexican Blend, gruyere, or even a goat cheese. If you have any leftovers they can be covered and stored in the refrigerator for a day. Simply reheat in the microwave.

INGREDIENTS:
4 C. frozen shredded hash browns, thawed (I didn’t wait and threw mine in the microwave for about a minute and a half to thaw mine)
3 T. melted butter
1/4 tsp. each salt and pepper
7 eggs
1/4 C. milk
1 1/2 C. shredded cheddar cheese
1 C. diced ham
DIRECTIONS:
Combine the hash browns, butter, salt and pepper. Spray your muffin tin, very well, with cooking spray. Fill the cups about 3/4 of the way with the hash browns and using your fingers mold the cups with the hash browns and pressing them down in the bottom. Place in a 400 degree oven for 20 minutes. Meanwhile, whisk together the eggs and milk, stir in the cheese and ham. Remove the hash browns from the oven and reduce the temp. to 350 degrees. Fill the cups almost to the top and return to the oven for 20-25 minutes or until the eggs are set. Let cool for a couple minutes, loosen the edges with a butter knife and carefully remove to a serving dish.
Source : allrecipes.com